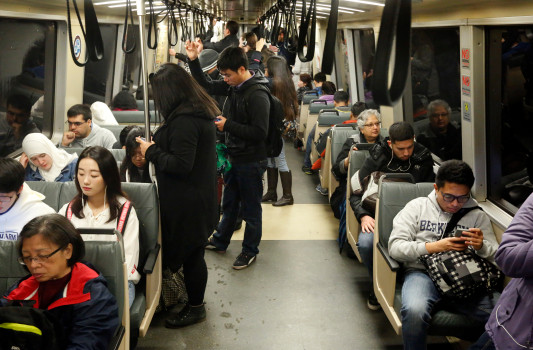 observations on a wednesday morning

I hopped on the early, early train this morning, the one two trains before the one I normally take, because I got to the station so early. It always surprises me how full the train is at 5:45 am.

When I stepped onto the train, I could see construction workers, half asleep, some squatting on their toolboxes, others sprawled across seats they’d managed to find before the train got full.  There were glassy eyed medical workers in their scrubs, blinking blearily out the window and kids on their way to daycare, mostly asleep in their parents’ laps.

There were a couple of college students too, trying to read from textbooks as the train jolted this way and that, clinging to the overhead straps to keep themselves upright.  A few stops in, two older women got on, each with a cane and looking like a strong wind would knock them over.  We had to rouse two able bodied folks sleeping in the accessible seats to make sure they could sit down.  It was one of those mornings where four accessible seats on each end of the car wasn’t enough for those who needed them.

I read most of the ride because I can’t resist the call of a new book.  At my stop, I got off the train with the masses and shuffled along to the escalator, praying that the escalator to the street was working because my right hip just is not up to stairs right now.  On the concourse I could see the homeless that had slipped into the station for a bit of warmth, sleeping while they could.  They’ll get roused soon enough and be forced to move on.  At least here in San Francisco they don’t have to worry about freezing temps and snow as they do in some places already this year.

Because I was early, I didn’t pass the regular people: the guy who looks like he belongs in a mob movie, the pregnant woman who is always on the phone, the homeless guy who sets up just in front of the one Starbucks, hoping for a cup of joe from a kind stranger.

Construction has the street all torn up, traffic re-routed, as they build whatever “pedestrian improvements” they’re making.  Closer to work, the striking workers were already hard at it outside the Courtyard Marriott, some of them blocking the side walk and chanting incoherently, others standing around the table where the coffee lives and talking.  I considered stopping at the Starbucks there, but then I remembered that they were closed due to the strike.

I was early enough that the usual security person wasn’t at the desk yet, so I nodded good morning to the man I don’t know and headed upstairs.  It was quiet and dark, the automatic lights weren’t due to come on for another 15 minutes…but I like it that way.

Now, however, the sun is up outside the window and I’m no longer alone in the office.  I guess that means I should refill my coffee cup and get busy. Happy Wednesday, Readers!  May it be filled with kindness.